Weekend Getaway! The Made in America music festival was a great way to end the summer and kick off the fall. It takes place Labor Day weekend in the city of Brotherly Love-Philadelphia. My friend and I actually made this a four-day weekend. We drove down to Philadelphia early Friday afternoon; it was only about an hour and a half. Now because this is such a big and busy weekend, many hotels were either going very quickly or the prices were increasing. To weeks to the event we ended up booking Four Point Sheraton by the Philadelphia Airport on Booking.com for a reasonable price. 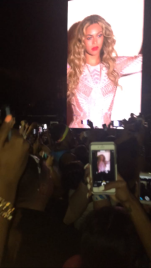 If you love music and being outdoors with a lot of people then I suggest you experience this event. The Budweiser Made in America Music Festival is a two-day concert packed with many different artist (of course it changes every year); but this year I had the opportunity to see Beyonce, The Weeknd, Future, J. Cole, Big Sean and so many others. This was really a good experience, and I would definitely go again.

Friday night, we met up with my brother and his friends downtown (he currently lives in Philadelphia); and they took us around. We wanted to stop by Fat Tuesday, but the line was insanely long, so we ended up going to a bar on Market Street. One thing I could say about that night even though a lot of the places were crowded and hard to get in, there was always options of places to go in a short radius. After hanging out at the bar we met up with some of our other friends from New York and went to Pat’s King of Steaks. Even though the line as long, we stayed because we heard the food was really good, plus the line was moving quickly.

Saturday- The first day of the festival we went to a Mexican-Spanish-Southeast Asian Fusion restaurant on the University of Pennsylvania campus called Mad Mex. I ordered chicken tacos and a “big azz margarita”. Unfortunately I lost all the pictures of the food and drinks; but it was really good (but then again I really REALLY love tacos so every chicken taco is good to me). After eating lunch we went to a place called “Philadelphia’s Magic Gardens”-a friend of a friend suggested that we go, and this place was absolutely beautiful! I loved it because it was simple and not over the top, the entrance fee is $10 for adults and $8 if you’re a student. The artist Zagar “created the space using non-traditional materials such as folk art statues, found objects, bicycle wheels, colorful glass bottles, hand-made tiles, and thousands of glittering mirrors.” This is a place I definitely suggest if you’re into art and museum like things…and the best part is most of the Magic Gardens is  there is artwork bot inside and outside (great lighting for pictures).

Sunday-The second day of the festival we went to brunch at Chhaya Café on Passyunk Avenue. I really liked the décor and ambiance of the restaurant, they had low music playing in the background; and they played Nigerian’s own King Sunny Ade, which made me love, the place even before eating. I ordered the French Toast Waffles with berries, a side of bacon and a side of home fries. The food was good and not too pricey. After eating we headed over to the concert, we missed Fabolous and Jidenna’s performances but made it in time to catch Future, Big Sean, J Cole and The Weeknd. I really liked second day’s line up than I did day 1; however it just depends on the type of music and artist you like.

Overall I had a great weekend, and a great experience. I would definitely go to Made in America again! If you think about it, we paid $171 for a two-day concert with various artist (some performed for over an hour); in my opinion this is better than paying $200+ to see one artist in concert.I am also planning on going to Philadelphia again soon, I want to tour the city like a tourist; plus my brother keeps telling me about a restaurant on a boat that he wants to take me too.

Made in America Festival Info http://a.madeinamericafest.com/