This was a steal of a lifetime! Deals like this don’t come around all too often or ever. I paid less than $260 round trip to Abu Dhabi, UAE on Etihad Airways. This trip was booked way in advance and gave us a lot of time to research before actually going. Now, I’m going to be very honest, I found out about this deal on twitter; people were tweeting about it and then I started doing my research on Priceline.com, Ortibiz.com, and TheflightDeal.com. I originally saw the ticket for $157…Like what!? Sent out text to friends and family asking “are you down?”. When I went back it was at $200; once I 1 person said “Yes” we booked and at that time is was $256.

This is one of those trips that I was super-excited about. I always said that I wanted to go to Dubai and Abu Dhabi, and now this was becoming reality. My friend and I went back and forth from looking at Airbnb.com and hotel prices. We also looked to see if visas were required, everything you can imagine we researched. One thing that also helped was that that we knew people who booked the same deal and they were going to U.A.E. before us, so we were able to ask about their experience, what they would recommend, etc.

We ended up going with a Hotel; “Bonnington Jumeirah Lakes Towers” right by the Dubai Marina. We booked our hotel through Orbitz.com (receiving 20% off), which came out to $708 for 4 days; which was not bad considering the location. This hotel also included a free shuttle that drops and picks you up at the Jumeriah Beach or the Dubai Mall. We took the shuttle to the Dubai Mall and a taxi from the mall to our destination (this helped to cut traveling cost).

Excursions! We went to the Burj Khalifah (tallest building in the world), sightseeing on the Dubai Marina on a speedboat, Safari Desert, and the Grand Mosque in Abu Dhabi. We purchased the Burj Khalifah tickets on Groupon for $38 on the fast track; the Safari excursion included: pick up/drop off, dune bashing, camel riding, ATV, Hookah, Henna, Dinner and live entertainment for $90; which is an amazing price for all that is included. The speedboat on the Marina was about $100 for the 1 hour ride. The Sheikh Zayed Grand Mosque in Abu Dhabi was free, and amazingly beautiful; I’ve never seen anything like it before. Not to mention the Dubai Mall is like an excursion on it’s own; it is huge with every store you could possibly think of; it also had an aquarium! We were not able to go to the Dubai Miracle Gardens, because it as closed during those months; I definitely want to go back to Dubai to experience that! 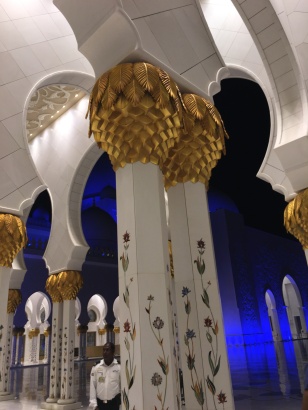 Dubai is well known for their gold. So of course I had to go to the Gold Souk. Seeing all the pure gold made my eyes light up! I literally wanted everything! The best thing about the market is that you are able to bargain prices with them (so never settle with the initial offer, always talk them down). Also if you’re buying more than one item from the same store , negotiate to make a package deal.

I was so amazed by the food selection in Dubai. I guess you could say that I didn’t really know what to expect. I found it very interesting that whatever food I wanted was there. They have every and any food that you want, and people from that origin cooking and selling it. When we were in the Mall, I ate tacos from Taqado Mexican Kitchen and of course began asking the cashier what part of Mexico are they from and how long they have been living in Dubai. The same conversation occurred when we went to Stefano’s an Italian restaurant on the Dubai Marina. Because Dubai is a developing city most people that I spoke to told me they have only been there for about 3 years or less. In my mind I began thinking that Dubai is becoming the new “New York” or Melting pot.

Lastly- Friday afternoon we went to brunch…my oh my! I recommend this brunch if it fits into your budget; it was about $100, however so worth it!. We went to La Meridian for their unlimited bubbly, seafood, and everything else. Good music and good vibes! There are so many restaurants that have brunch and have different things going on, so make sure you do your research and find the one that best suits you.

Our flight going to Dubai was a 12.5 hour direct flight, and the returning flight was a connection flight, we stopped in Brussels, Belgium. I must say that as long as the direct flight was, I liked it better than the connecting flight.

Tips: 1. Stay close to the Dubai Marina if you can. It is in the middle of almost all the things and places that you would want to go. 2. Know how to bargain when at the Gold Souk 3. Exchange your money in moderation so that you don’t have too much (Dirham) left over (unless you plan on visiting again!) 4. Download the currency converter on your phone. 5. If you’re interested in touring the Dubai Miracle Garden, make sure your check their opening months online prior to booking your flights. 4. If you’re returning home during the week, try to take an extra day off of work just to readjust and rest!

FYI: I have so many things from this U.A.E. trip that I would like to expand on, so I will have other post to follow about this trip…also I need to share the story about how my friend and I almost got duped by a wanna-be taxi driver!